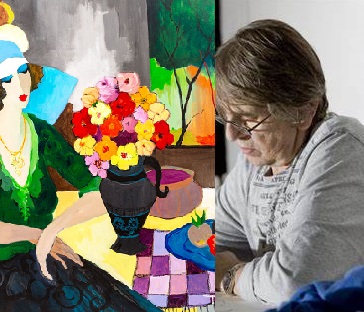 Tarkay Itzchak was born at Yugoslav-Hungarian in 1935, at the age of 14 Tarkay and his family emigrated to Israel.
In 1951, Tarkay’s got a scholarship to the well known Bezalel Art Academy in Jerusalem,
after one year due to his family’s financial difficulties and his obligation to serve in the Israeli army he had to stop being a student.
After his service at the Israeli Army, Tarkay moved to Tel Aviv and enrolled in the Avni Institute of Art, graduating in 1956.
From that time, he toke part in exhibitions in Israel and abroad, and received his international recognition by taking part of the  International Art Expo in New York City year after year.
The great appeal of Tarkay’s work has been described as possessing “timeless, universal values – values that have staying power and do not simply ride the tide of fashion.
He painted Elegant Women with colorful & strong colors to showing the power of the Women in everyday life  , Influenced by French Impressionism and Post-Impressionism,
like Matisse and Toulouse-Lautrec , Tarkay passed away on June 3, 2012.
Trakya’s  has a reach show list from all over the world,  his artworks can be found in private & public collections around the world.
Art Time Gallery has a very unique and beautiful paintings by Tarkay that are really masterpieces .