I am a Child 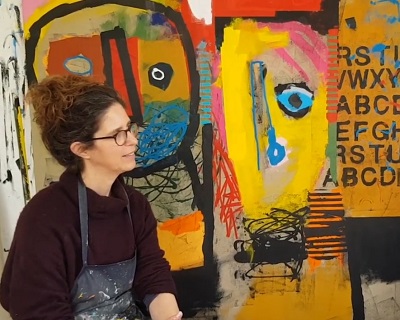 Born in 1968 in Israel. Lives and works in Hefer Valley Regional Council. She studied graphic design at the College of Jezreel Valley.

The content of Gal’s artworks is based chiefly on her family’s stay in Africa as a child. Those experiences found their way into her consciousness when she became a mother herself. The tribal symbolism she was familiar with echoed in her young son’s paintings and those formed the unique colorful style seen in her work. On the one hand Gal’s work embodies the tradition of African culture, which is reflected in the faces of her abstract characters and masks. But on the other hand, the artist does not dictate the meaning of her creation, but rather draws the decision to its viewers who experience different varied responses.

Gal is also very influenced by street art and the graffiti style that started in city centers around the world – especially from the New York (Harlem) artists’ Jean-Michel Basquiat, a Neo-Expressionist painter in the 1980s. He is best known for his primitive style and his collaboration with pop artist Andy Warhol.

Ilana Gal has been featured in private and group exhibitions throughout the world.